Ranking season is upon us with the QS rankings of subject areas (not, as is commonly though, Departments) now revealed. Again we find that despite the hype Irish universities are stronger in Arts and Humanities than in the STEM areas. This is in stark contrast to the financial flows to these areas and in even starker contrast to the government and regulatory thrust. Evidence of sustained internationally recognised quality in the AHSS (arts, humanities and social science) area does not translate into funding, support or recognition. Perhaps its time it did?

END_OF_DOCUMENT_TOKEN_TO_BE_REPLACED

Breda O’Brien doesnt get it.. Taking about some of the vile abuse she gets she notes

“It was really incredibly toxic at that time. I don’t want anyone to be in a closet but I felt that I was almost being forced into it. And I don’t think that’s fair to anybody.”

That you were being forced into a closet?

“Yeah. That there are certain things you believe in that you can’t say.”

Thats right Breda. You or I or the man next door or the lass selling the paper might believe that blacks are inferior to whites, that the nazis didnt do half enough of a job on the jews, that we should be allowed rape our spouses, or even that we can enslave migrants (a la Leviticus 25:45). But, you know what? We may think that, believe in it utterly, but in public we need to drink a tall glass of STFU. Because as a society we work only when we have a modicum of interpersonal tolerance.

via ‘Gays should abstain from sex – like all unmarried couples’ – Independent.ie.

END_OF_DOCUMENT_TOKEN_TO_BE_REPLACED

So twitter have decided to move all its non US operations to a structure that will be regulated out of Ireland.

Here (Second floor..) is the office of the Irish Data Protection commissioner. Are you feeling more or less confident now about your data integrity? 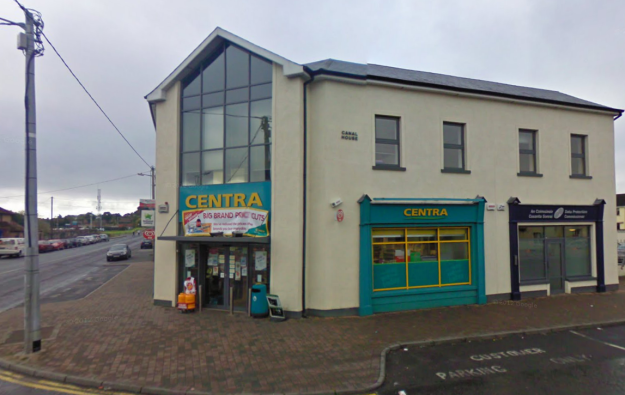 We as a polity are not big on evidence based policy. We rather form an opinion, then seek evidence for it, or better yet stay silent. This leads to suboptimal decision making, to put it mildly. The emergent debate on tax shows this in spades.

END_OF_DOCUMENT_TOKEN_TO_BE_REPLACED

Lots. Much of this document arises from discussions and emails with Loc8. I am not affiliated with them in any way but they have always seemed to me to be at least as good if not manifestly better than Eircode. And FREE!!! I understand that the material here plus more was provided to the Minister in December but as of now no response has been recieved. Perhaps the Minister might read this?

What has Loc8 Code got to offer over Eircode?

A shoal of Red Herrings

END_OF_DOCUMENT_TOKEN_TO_BE_REPLACED 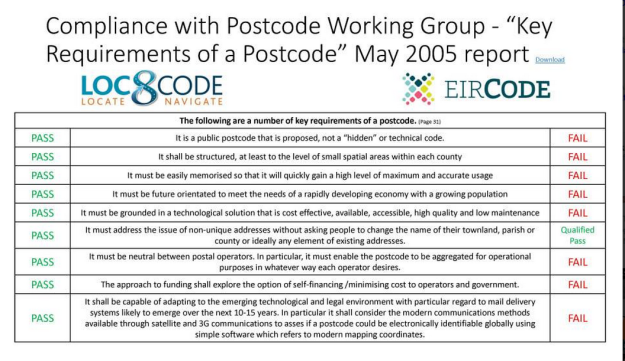 In 2005 the Irish Government issued a report on the desirable elements of a postcode. The report is here : http://www.dcenr.gov.ie/Communications/Postal/Postcodes.htm
In 2013 the Eircode system is announced. Here is how it stacks up against a free, existing, system (with whom I have no involvement)

Meath CoCo are, this coming week, to debate Eircode. The following is briefing material which has been sent to them on Eircode , supplied to me by but not produced by Loc8. Although this is a competitor, it has the massive advantage of being FREE. I reproduce this ‘as is’ for comment. Any comments by myself are contained within [brackets]

Why the current Eircode design must be dropped.

• As a result of its design, key Heritage and Tourist sites such as Newgrange and the Hill of Tara cannot have an Eircode. Eircode will not therefore, be useable for many elements of the Heritage, Tourism, Sporting, Angling, Logistics, Religious, Education, Marine, Farming and Forestry sectors in Ireland.

• Eircode will not improve the known ambiguity of Irish property addressing and therefore will not improve health and safety or general public safety and related duties of care for Local Authorities ; See here

• Eircode is not supported by any major technology companies including those who produce navigation systems such as Garmin or TomTom, which will make it difficult for ordinary people and tourists to use in their daily lives.

• The postal districts to be built into Eircode will extend new Dublin 4 and Dublin 6W like postal areas (routing keys) across the whole country with associated changes to property and business values as well as the apparent rezoning of land. This will have significant implications for Local Authorities and will result in many representations to Councillors. These new areas have never been published for consideration. [ this should be interesting….but it is in fairness something that comes with most  postcode systems. What is worrying is that these areas are not public. Why? ]

• Eircode has never been tested, piloted or certified fit-for-purpose. In all other countries a new postcode is piloted in a small population centre before national roll-out. This is not planned for Eircode. Eircode has never even been presented to a focus group for evaluation. A sample CD recently sent to industry groups, contained no Eircodes in order to allow evaluation and no indication of the new Dublin 4 like postal areas (routing keys) planned for the rest of the country

• Major Industries on which the success of Eircode is dependent have expressed serious concerns about the structure of Eircode. The Freight Transport Association, whose members deliver the bulk of goods to business and houses across Ireland (DHL, FEDEX, UPS, DPD etc) have said they will not use it and Emergency Services’ representatives have said it could cost lives. [This really is a killer – these people KNOW the benefits of postcodes. That they will go without, or with an unofficial system, rather than use the proposed one, that really tells us something]

• Minister White, and Rabbitte before him, has never engaged with and effectively ignored key user/industry groups in relation to Eircode and have repeatedly stated that the total cost of Eircode will be €27 million when it is known that it will cost the economy in excess of €100m. The specific costs of for Local Authorities have never been quantified. [More mushroom treatment…]

• Eircode is not the hierarchical code that was tendered for and it has never been subjected to a cost benefit analysis. It does not comply with the requirements identified by the National Postcode Board which was established by Minister Dempsey in 2006 to set out requirements.

• Eircode is over dependent on GPS and mobile phone technology to use it and will not be useable by an average citizen just by looking at it. It is deliberately randomised which will cause confusion. It contains none of the qualities of the UK postcode which are well proven to be useful to all user groups. [ the great thing about a UK style code, and they pioneered them, is that by looking at a map one can see what the code is. This Eircode, no..]

• Eircode is currently the subject of an ongoing Joint Oireachtas Transport and Communication Committee Hearing which has no deadline for reporting.

• Eircode is currently the subject of a Comptroller & Auditors General investigation which is due to report after Eircode is rolled out. [horse, stable door…. ]

• Eircode is bad for citizens, bad for business, bad for tourism and bad for our emergency services. The manner it was launched by Pat Rabbitte ignored the Postcode Working Group & ignored expert advice. While Rabbittes successor, Alex White, has to date ignored all valid criticism of Eircode from interested parties.

• Eircode will be an expensive fiasco just like eVoting & PPARS in the past. [ well, probably not as expensive]

We are not good at joined up planning in this state. As the economy improves and the state begins to have some discretionary income, it is perhaps too much to hope for that the historical  approach to planning, of random actions that at best don’t join well or at worst cut across each other, that this will be supplanted by some degree of rationality.
END_OF_DOCUMENT_TOKEN_TO_BE_REPLACED

A few months ago I registered with Irish Water, on the phone. I didn’t see the need for the PPS numbers so used the phone method. At no stage did I give my PPS details. Imagine my surprise when I got not one but two letters today from IW, signed by Paul O’Donaghue, head of customer relations. What a job that must be…