It seems that TCD is doing the academic equivalent of taking a dive.

Ranking season is upon us with the QS rankings of subject areas (not, as is commonly though, Departments) now revealed. Again we find that despite the hype Irish universities are stronger in Arts and Humanities than in the STEM areas. This is in stark contrast to the financial flows to these areas and in even starker contrast to the government and regulatory thrust. Evidence of sustained internationally recognised quality in the AHSS (arts, humanities and social science) area does not translate into funding, support or recognition. Perhaps its time it did?

END_OF_DOCUMENT_TOKEN_TO_BE_REPLACED

Rankings are like the closing days of Gay Byrne’s tenure in the Late Late Show. There is one for everybody in the Audience. A new ranking has been gaining ground recently, Eduniversal Ranking, based mostly on interviews. Irish Business Schools are doing quite well. END_OF_DOCUMENT_TOKEN_TO_BE_REPLACED 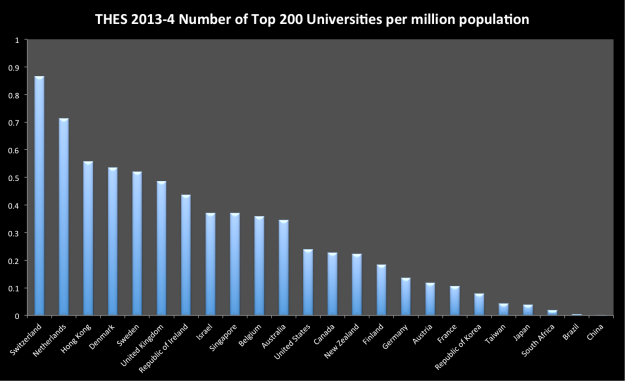 So, the THES world rankings are out and there will no doubt be the usual wailing and fingerpointing. Why are no Irish universities in the top 10? the top 100? etc etc (hint…its expensive to be there….) .
Yes, there are issues in what the rankings tell us, and I will return to that. But for the moment, look at the chart here. Its a graph of the number of top 200 universities per country scaled to millions of population. If we were the same size as the larger island next door this suggests we would have approx the same number as they do. Is UK higher ed in a terminal crisis (feel free to not answer!).

How many of the reporters, commentators, pundits, critics and analysts who will opine on the awful state of universities are in the top 3% of their profession in the world? How many of the politicians….?

Irish universities are world class. Really. So says the Shanghai rankings, the ones that perhaps are most heavily weighted against the strengths of Irish unis. How do we know? Well the 2013  rankings season kicks off with the Shanghai Academic Rankings. Expect mutterings along the lines of “sure its terrible, we have no universities in the top 100 of the Shanghai rankings” and “bloody academics, useless, wastes of money, look no Irish university in the top 100, world class me eye” and so on. No doubt similar wailing will happen when the THES rankings come out, with slightly different metrics.

Question : how many Irish institutions, public or private are consistently ranked by peers, customers, and input providers as being in the top 2% of their peers in the world?

Answers on a postcard please.

The state of Irish higher education

A selection of interesting quotes from the outgoing president of IFUT

The Leiden world university rankings are out. We’re ranked at 48, up from 63 last year, and have therefore moved into the top 50 in the world in this ranking. UCD is ranked 281, UCC 181. Which is nice…but dont get too carried away.

The Leiden methodology uses research and collaboration metrics only – no ‘reputation’ surveys and no attempt at those problematic/questionable ‘teaching’ metrics used by the THE . So, its like all of these, partial and incomplete. But in so far as it goes it is very solid  The ranking is presented based on research impact, but views by other indicators are also available. See here for the full set .