The chart shows the annual number of articles published in the Financial Times about gold between 2004 and 2014 from the FT Interactive Database. The total height represents all articles filed under the topic Gold by the Financial Times editors. The lower portion show the number filed under Topic: Gold as well as having gold in the title. So the number under the topic gold was 401 in 2009 and 212 of those (53%) also had gold in the title.

So, as most reasonable people hoped and expected, a compromise has emerged. Greece extends the bailout for four months, has a few days to suggest measures that will work to meet the broad targets therein, but the overall constraints on the primary surplus can, seemingly, be relaxed. So, a less austere bailout. Germany wins on forms of words – the Troika (now unnamed but there) remains, the bailout remains, but the words that are used suggest a lower degree of austerity. Peston sees the Greeks getting the best of it as does Frances Coppola, Bloomberg the Germans, Frances Coppola noting that this gives Syriza a chance to show that it and Greece via it can be trusted to behave like a modern half decently managed country. I think she misses the point in making this point. Greece has an appalling record, but the ordolemmingism that Germany has pushed onto everyone as The One True Way to Prosperity also represents a breach of trust, that states can find their own way within bounds of sense.

Nonetheless, I dont see this as the end. Here, in a picture, is why. Its about words. Humpty Dumpty stated ‘When I use a word, it means just what I choose it to mean — neither more nor less.’. Are Greece and Germany reading the same words while being on the same page? I am not sure.

Germand and Greeks use words and impart meaning to language in very very different ways. The diagram is from Richard Lewis, and is a model of national cultures to complement the well known World Value Survey, GLOBE, Schwartz and Hofstede models. Crucially, it concentrates on language. Cultures are arrayed around three main poles.  These are as below  Germans are Linear-Active. They place great store on the written word, and are planners. Greeks, not so much. The spoken word, in other words, interpretations of what the written word might mean, that is what matters. 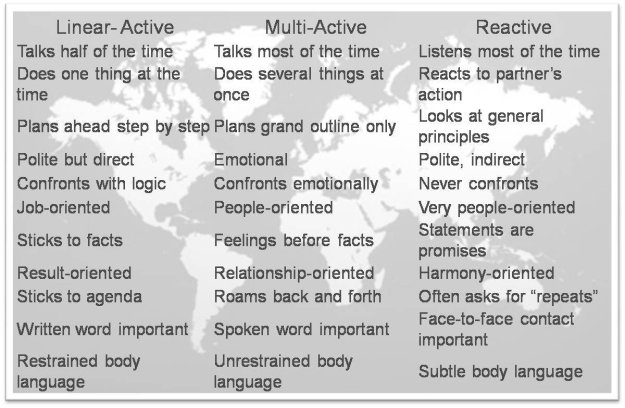 As I write, on Thursday afternoon, disarray reigns in the Eurozone… again. Astonishingly, it seems that this time it is semantics, whether to call what the Greeks are willing to accept a bridging loan or an extension of the bailout, that has caused the breach. And the fault lies squarely and firmly with the Germans. Again.
END_OF_DOCUMENT_TOKEN_TO_BE_REPLACED

Much is made of the meme “sure if the Greeks only paid their taxes…” . The argument, such as it is, elides into the “sure theyre all crooks” and “they should never have been in the EU”. It tips over into racism easily. So what is the case?

END_OF_DOCUMENT_TOKEN_TO_BE_REPLACED

At the top of the tree in academia are Personal or Chaired Professors. Are all created equal? END_OF_DOCUMENT_TOKEN_TO_BE_REPLACED 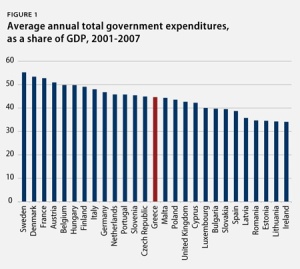 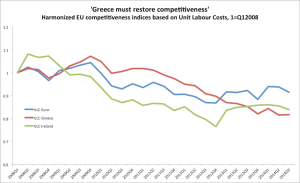 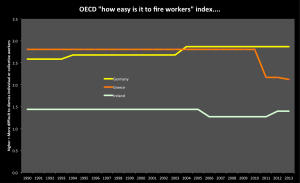 Inspired by Kevin O’Rourke on Greek-Irish structural deficit reductions (they win) , here is my modest effort. Remember, the Greeks, shiftless lazy lot as they are, must work hard to restore competitiveness. We manly Irish have squeezed costs to a fare thee well, and now are ready to bestride the stage of ordoliberal export led growth…

FWIW the same story, of a more competitive and arguably improving faster Greece compared to Ireland,  is there when you look at other measures of competitiveness….

A Little Night Music is a great musical. In Act II Desiree looks back ruefully on her folly, and in particular her throwing up a chance at happiness with Frederick. She tries to get him back, he being in an unhappy marriage, but he declines. Eventually of course, they get together after the ungrateful wench to whom Fred is married runs off with his son.

Its not hard to take parallels with the Greek situation. Rueful musing on the folly of throwing over the Drachma, desperate attempts to make a bad situation work, a crisis, and …. well, lets see

In the meantime, some lyrics, which Yanis may have been humming last night.  Tune in later for a performance from Frances Coppola, to match My Favourite Greek Things

The Germans give nicht

Drachmas at last on the ground

The euro will tear

Please send back the clowns

But the center wont move

Why are there clowns?

Please, send back the clowns

Extend a loan, defer, then theyre yours

Another long meeting again and wit is quite spare

Few there are kind

Sense is not there

We all colluded and winked

The center is rich

It isn’t a union you know,

And designed by clowns

Its run now by clowns