The proposal by the German finance minister, and agreed to by others, that Greece take a five year break from the Eurozone is astounding. Its not so astounding that a man who has been musing on this for years has now tabled it. Schauble has as far back as 2012 been wanting this. What is astounding is that he had the gall to table it at the Eurogroup. Given that the Eurogroup is self admittedly a body with no legal basis or structures, I suppose they can do whatever they want. But when it’s a group of finance ministers musing on something ultra vires we should be concerned. And what they are doing, or proposing to do, is exactly that. END_OF_DOCUMENT_TOKEN_TO_BE_REPLACED

Greek myth, which is in case you missed it full of tragedies, is the cultural mine that keeps on yielding for the present crisis.

END_OF_DOCUMENT_TOKEN_TO_BE_REPLACED

The last week has seen a boom in one area of human endeavour, the utilisation of metaphors drawn from Greek myth to describe the present state of play in the Hellenic Republic.  That Greece has been undergoing a slow motion tragedy, now accelerating, is undoubted by (almost) all commentators.  A modern, developed, European, democratic country is devolving before our eyes into one where malaria and tuberculosis are making an unwelcome return,   a laboratory for failed economic experimentation in which the hapless citizens are the denizens of the monetary petri dish.

END_OF_DOCUMENT_TOKEN_TO_BE_REPLACED

Pretty damning stuff. Those that smugly, glibly, heartlessly, self interestedly , and ignorantly witter and astroturf about Greece needing to do X Y and Z might want to read this. But then that might challenge the closeness of their minds.

Below the concluding paragraphs..

We may not like the conclusion, but it is quite simple. Greece has not grown and prices have fallen because that was to be expected when persistent austerity is laid on top of an unsustainable debt. The debt-deflation spiral always outpaces the returns from structural reforms. As certainly as these things can be predicted, on the path set out by the creditors, the stakes will continue to be escalated: the debt-to-GDP ratio will continue to rise, the calls for more austerity will grow, and, as the pattern repeats, more debt relief will needed.

So we arrive to the present. The IMF looks back at its diagnosis in November 2012 and says, the Greeks did not follow our advice; it is no surprise that they are in a mess and they need more debt relief. The truth is that the Greeks are in a mess precisely because they followed the IMF’s austerity advice and because the promised elixir of structural reforms was illusory.

And the double indignity is that the IMF now wants the Greeks to do more austerity in the midst of a debt-deflation cycle because it chooses to misread the evidence of the past years. If that advice is, in fact, followed, it is nearly certain that the Greek debt burden will be greater in two years than it is now.

We may cast a moral and political spin on these facts. Indeed, it is understandable that political considerations will play a central role in the European dialogue. But the economic logic is relentless. And the IMF’s role—its only role—is to render the economic logic transparent for informed decision making. In disregard of generations of fine IMF economists and research, the IMF has engaged in its own moral posturing to retrieve its money and hide its failures.

To be clear, the argument is not that more debt relief be promised in exchange for more austerity now. The argument is that debt relief is needed now to prevent the need for even more debt relief later. It is as much in the creditors’ interest to change course as it is in the Greek interest. Once that premise is accepted, then within that basic framework there is much that the Greeks can do to improve their lot. But such is the momentum, the politics will almost surely subordinate the economic logic. That would be a mistake. At what is surely a pivotal moment in European and global history, at least the facts must be laid out transparently.

via In bad faith | Ashoka Mody at Bruegel.org.

The Greek mess is one in which there is plenty of blame for all sides.
END_OF_DOCUMENT_TOKEN_TO_BE_REPLACED

So nobody knows what is going on in Greece. Tspiras seems willing, as he has done all along, to compromise. Meanwhile, Dr Schaubel, which is German for “hell, no”, seems to as willing to be as uncompromising as possible, in between lecturing the ECB

If Greece does GREXIT, which is not certain, this will result in a depreciation of the currency by up to 50% some reckon. And here is the rub. Greece is critically dependent on certain things which will get expensive, while its exports (in trade) are not that large nor perhaps that amenable to rapid rampup in the face of increased demand concomitant on falling prices, or are indeed priced in non Euro currencies anyhow. While tourism and services help, Greece runs a massive CA deficit. The logic of GREXIT is that somehow not only will debt disappear (only if they default in tandem will that happen) but that exports will boom. Well, maybe.

This whole thing has been grossly mishandled, and while the Greeks have a bunch of blame, the TROIKA must take the lions share. If they are, as Lagarde said, the “adults” then its time to start behaving like it. 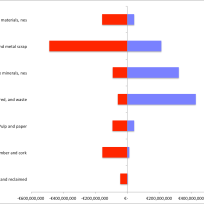 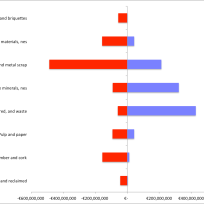 In 2010 Anglo Irish Bank needed 30b in cash, to pay deposits and bonds. The Irish government hadnt got that on hand. In fact, it was out of any sort of then acceptable collateral.  So, it wrote an IOU to Anglo, saying “we’re good for this”. They then took this to the  Central Bank of Ireland, swapping a promissory note for actual cash via ELA.

Greece has now been told that its available collateral notwithstanding the ECB will maintain ELA funding at what it was. With deposits flowing out at a rate of 1b plus per day this clearly puts the screws bigtime on the Greek government.

The ECB allowed this Irish monetary sleight of hand. Things, not least tempers and mood, are different with greece but there is at least a possibility that they might so allow. At the least Greece could argue that as was treated Ireland so should they be.

These prom notes dont last – the ECB required them to be extinguished, quite smartish, but as a means of getting over a liquidity hump, and that is where Greece is at now, they are worth considering.

This paper studies the role of exit from a monetary union during a debt crisis. A monetary union, such as the European Monetary Union, needs to establish a procedure for exit as a tool to cope with debt default. The paper studies various forms of exit and argues that “Euroization” is both a credible and effective means of punishment for countries in default.

Is there an easy way out? Private marketable debt and its implications for a Eurozone break-up

As the Eurozone crisis lingers on, euro exit is now being debated in ‘core’ as well as ‘periphery’ countries. This column examines the potential costs of euro exit, using France as an example. The authors estimate that 30% of private marketable debt would be redenominated, but since only 36% of revenues would be redenominated, the aggregate currency mismatch is relatively modest. However, the immediate financial cost of exiting the euro would nevertheless be substantial if public authorities were to bail out systemic and highly exposed companies.

Severe cash constraints faced by the Greek Government due to a pretty demanding schedule of interest and amortization payments in the remainder of 2015 have lately engineered a new explosion of sovereign bond spreads and rekindled fears of a GRexit down the road. Such fears have been exacerbated further in late April 2015 as the progress in implementing the February 20th 2015 Eurogroup agreement has proven to be rather slow and the cash-strapped Greek Government is struggling to meet sizeable debt service obligations. As a result, media reports had been speculating on a number of disastrous scenarios, ranging from the imposition of capital controls or the payment of civil servants and various state suppliers with promissory notes to a sovereign default, either within or outside the Economic and Monetary Union. This paper refrains from analyzing the legal and technical complications involved in the materialization of any of the aforementioned scenarios. Instead, it leans on purely economic and political economy considerations to argue that calls for exit are ill advised, potentially involving immense risks not only for Greece, but also for the EMU project as a whole. We take a close look at Greece’s past history of drachma devaluations and their outcome, the current high sovereign indebtedness, and the country’s persisting competitiveness gap vis-a-vis its main trading partners as well as the effects of financial contagion during the ongoing European Sovereign Debt Crisis. We explain why a GRexit would be a hugely suboptimal (and, in fact, a highly dangerous) strategy to address these problems.

via GRexit and Why It Will Not Happen: Catastrophic for Greece and Destabilizing for the Euro by Platon Monokroussos, Theodoros G. Stamatiou, Stylianos Gogos :: SSRN.