Peter Drucker stated What Gets Measured Gets Managed and he is right. This is managerial equivalent of looking for your keys where the light is rather than where the keys may be. Want people to do something? Measure it, reward the metric and then they will achieve. Its a great way to drive performance IF the metric being measured is a sensible one.  Today we see a proposal that is non-sensical. This morning we see that hardy annual, that hoary old chestnut, the creation of one single University of Dublin, pop back up above the sodden ground. In passing, we might note that this is achievable very easily. There is a University of Dublin, the sole constituent college of which is Trinity College. If the government or whomever want a single university I am sure the fellows and board of TCD would look kindly on allowing UCD to come in as  a college, subsuming it into the University.

That is not what this latest incarnation of this zombie theory is about however. Like an ant on a moebus strip the theory comes round, goes away, and so on. According to the Irish Times “The report says a UCD-TCD merger would give the merged college the critical mass and expertise needed to secure a place among the world’s best-ranked universities. At present, Ireland is not represented among the top 100 universities in the prestigious Times Higher Education World Reputation Ranking”  So now we have a metric which is (although about the best in class) flawed and which is undergoing continual improvement (aka change).  For comparison, the THES rankings of world universities in 2011 had TCD at 117 and UCD at 159. These are slippages from the heady heights of the 2009 and 10 period but given the construction of the THES rankings changed this is not strictly comparable.  In any case, why top 100? This is metric shibboleth, cargo cult stuff. Why not top 10, or 120 or 25? Why not top 100 in Europe (oh, hang on we are there already, TCD being 42 and UCD 65 ) . Why Times Higher? Why not one of the many many many other world rankings (see a discussion on the strengths and weaknesses of these in an EU document here) that exist? Why tie our national higher education strategy (hah) to an external metric which has changed in the last two years (To our ‘detriment’) and which will change again . 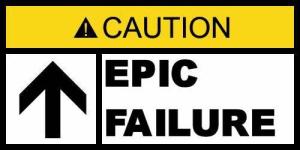 And it wouldnt even work, absent radical radical surgery. An analysis by Steve Hedley of UCC law school and the aggregator blog 9thlevel Ireland shows this. Steve goes through the data and concludes ” So this merged university would at best be ranked at 104 in the world, along with Delft University of Technology and the University of Montreal – and still just outside the top 100.  On the less optimistic assumption, it comes in at 134, just below the University of Leeds, and some 17 ranks lower than Trinity actually achieved. If ranking is the problem, merger does not solve it.  It may, indeed, make matters worse: losing two world-ranked institutions, in return for a single one which is not guaranteed to do particularly well. Of course, ranking methodologies can and will change – but there is nothing to suggest that these changes will favour Irish institutions.”  So a merger, designed to achieve the aim, would not. In fact it would make things worse.

Heres the bit to annoy everyone in UCD. We already have a world class university in TCD (actually, much of UCD and some spots of others are world class also). Bearing in mind the fact that rankings are fairly pants, if we are determined to use rankings lets see where we might rank in areas. QS produce their own world rankings (where TCD is number 67 and UCD 131) and also produce subject area rankings. These are not schools, but rankings of subject areas, and so a university which does not have a school can have a ranking in an area , such as Accounting and Finance in TCD.  The rankings are a combination of research (citation count in essence) , peer evaluation (where one is asked to think of the top universities in a subject area ) and employer feedback. The weights range from about equal in the engineering areas to mainly academic in English language and 50% research 40% academic for biology. So they make an effort to be balanced although are still blending apples, wombats and feldspar, not even different types of citrus fruits.

So where do TCD/UCD rank?  Here –QS Subject Rankings – see  the 2011 and 2012 subject area rankings. Feel free to make your own mind  , but one thing comes clear : TCD is in most areas “ahead”. If we truly want to improve our “ranking” then we have an in-country benchmark for others to attain. What is it about TCD that allows it to achieve this? To what extent is it replicable? To what extent does this tell us about centers of excellence? Might a policy of determining what as a society (not as  an economy) we wish, then determining what that would cost, then working out how much we can afford and from whom, then creating and incentivising structures in universities to work within these parameters, might that not be  a better aim than determining that we want to be in an arbitrary position on an external metric?