Education is a complex matter while reducing it to simple soundbites is easy. Ignorance, in the pure sense of not knowing, abounds when it comes to higher education. Alas, ignorance creates memes that are powerful.

END_OF_DOCUMENT_TOKEN_TO_BE_REPLACED

This is a version of my Irish Examiner column of 10 august 2013
The Irish mortgage situation continues to bedevil both political and economic commentators. It does this in an almost complete vacuum, and as we know nature abhors a vacuum, and so this is filled with chatter and verbiage. Out of this chatter has come a series of memes. Memes are social genes – they propagate and mutate, sometimes becoming full blown urban legends other times lurking in the collective subconscious like recessives only emerging to render their carrier sterile blind and damaged.

One such meme is that over 1/3 of Irish mortgage arrears are “strategic defaulters”. That is a delicious meme. The words sound precise and weighty, and convey an image of hordes of  well heeled investors sipping pimms while debating their financial future with  advisors. It conveys a deliberate decision to engage in an activity which then creates both cost for the prudent and lays the ground for moral hazard to ensnare the weak. It makes default a deliberate decision made in cold calculation.

It is of course a meme that is almost wholly grounded in air. Are there people who make cold, calculated decisions to walk away from their loans and leave the state to pick up the mess while they continue in the style to which they have become accustomed? Assuredly there are and the vast majority are in NAMA, multimillion bankrupts and defaulters the downfall of whose empires of sand lit the fuse that blew up the state.

We know very little about mortgage default in Ireland. But this doesn’t do much to stop the rot about strategic default.
We know how many mortgages are in arrears. As of march 2013 this stood at 142k residential and 39k buy to let. Note that this is not the same as the number of persons, who are less, but by an amount we do not know. Some residential mortgages are really buy to let. Other persons have multiple mortgages. Others are joint mortgages.  Others have both buy to let and residential mortgages in their name. In any case the first thing we do not know is : how many persons are affected directly by mortgage arrears, either as principles (mortgagees) or as direct family members.  Bear in mind that there are approx. 1.7m households in the state, even if every case was a single discrete person and nobody had both a residential and buy to let mortgage we would be talking about approx. 1/10 of all households. In reality the number is probably lower. But we do not know.

These mortgage numbers account for 18.3% of all residential mortgage numbers and 23.1% of total value, and 26.3% volume and 35.2% for buy to let. These are pretty horrific but when we look at the actual amount in arrears we realize that there is a much smaller amount at risk. In buy to let we have total arrears of 1.1b or some 3.8% of outstanding and for residential we have 1.9b or less than 2%. Thus the problem is relatively small.  Even if 1/3 of all were strategic we are looking at one middle sized NAMA borrower.But unlike the mortgage holder who defaults won’t get s €200k salary from the state to manage his debt.

We do not know what percentage of this small percentage of mortgage default is “strategic”. In fact, worse, we have no clue what that means. It is the loosest of terminology. At one level we have people who make a decision to priorities essential family expenditure on health and food over mortgage; these are what we might call shouldn’t pay; then we have people who have extreme difficulty in juggling mortgage and other payment; these are what we might call can’t pay. Then we have the defaulters who simply refuse to reduce their lifestyle expenditure, the won’t pays. We do not have a working definition. Some research suggests defining it as not being current on mortgage while being current on other loans. Given that there has been a remarkably small decline in the amount of money outstanding on credit cards it is reasonable to imagine that some at least are keeping this in play (being current) while not being current with the mortgage. Others define it as being 90 days plus in default for more than 2 months while having financial means to not be in default. Others define it as defaulting to gain a short or long term financial advantage, which is almost tautological and which ignores the fact that the longterm disadvantages almost certainally outweigh any shortterm liquidity advantages. So a second thing we need to find out is what the various stakeholders consider to be strategic, as opposed to accidential, or liquidity, or any other form of default.

We also know little about the circumstances of the people in default. The central bank published some excellent reports in 2011, but we are ignorant now of the interrelationship between levels of under and unemployment, negative equity, after tax income changes over the last half decade and arrears levels. Research from the USA shows that unemployment and reduced savings balances are the main things which tip people into default.

Nor do we know what the final tipping point is. It is, from US research, rarely a cold economic decision, giving the lie to the strategic nature of default. It is much more an emotional decision, where people find themselves unable to cope and begin withdrawal. The consequence of this is that more aggressive bank processes are likely to shock people into more arrears not less. Combined with the fact that US research also suggests that social herding is important, the more people you know who have defaulted being an important determinant of whether you default and banks and government run a risk. Absent knowledge of who and why are in default action which is predicated on their being a large body of strategic defaulters who can be prevailed upon to start paying a risk emerges of reducing social stigma from default which combined with the emotional triggers will increase default

Given all this ignorance it is imperative that we lift the veil. A proper analysis is long overdue.

The idea of a meme is that its a concept, a psychological or cultural trait, that propagates  Like anything that propegates it can only do so if it is allowed to. Thus we have seen grow up the meme that Ireland did not pay the 3.1b which was due in March 2012 on the Anglo Irish Promissory Note. This is sown by ministers who either do know (so they are telling untruths) or should know (in which case they are not able to read government accounts and thus we might  question their fitness to be in high office).  It is however fertilized by the unquestioning swallowing of this by the media, print and broadcast, who again either dont know (why then are they questioning on issues wherein they are ignorant) or know but dont care to press (why then are they pretending to be impartial journalists?)

Here are some recent examples

These statements are simply false (with the exception of Varadkar’s comment which seems to see issuance of a bond as being somehow not a payment….one wonders what the conversations round the cabinet table are like).  We paid. In full. This has been explained succinctly in a letter to the Irish Times and more fully  in a blogpost by Constantin Gurdgiev. It was explained quite fully back in April by Karl Whelan.

The Anglo note was repaid in 2012. To say otherwise is to deceive oneself or to try to deceive others. Ministers need to stop doing so and the media need to stop facilitating this delusion. Oh, and someone needs to ask Minister Noonan to correct his (no doubt inadvertent) misleading of the Dail.

a) As Karl Whelan notes the key facts are : did IBRC get 3.1b? Was that used to extinguish ELA? Answer to both is yes. The mechanics of what arm of the state did what when is of technical interest only.

So. The problem it seems with greece is not its unsustainable  150% debt to GDP ratio, or the habit many of its wealthier citizens have of being creative with tax. No …. its that they are lazy olive botherers who simply dont work hard enough. That lazy stereotype, a trope of the crisis, comes round every while. The greeks are simply lazy.This we know to be true (sic) as the germans, sorry, the Troika, demand that they work harder, perhaps six days a week 13h per day. No, really.

Well, no, not really.

First, lets see where the money went – it didnt go to keep the average greek in the lap of luxury.

So. Maybe they should work harder, after all, as we in ireland know , bondholders must be paid off. It sounds better in Finnish….

Well, they do kinda work hard.  Harder than, ooh, say, Germany. Or Ireland. (data from http://stats.oecd.org/

Well, maybe its because its too hard to fire people in Greece . After all, the Troika have suggested that greece deregulate its labour market and are especially worried about unemployment becoming structural (because perhaps in addition to greek workers being unifireable they are more comfortable on the dole). Hmm.. higher numbers = more restrictive in the chart below..

As for the incentive to say on the dole once you have gotten there…lets see. A very recent (german) research study published just a few months ago (Pfeifer, 2012 International Journal of Social Welfare , V21) says this about Greece

Depicting European UB and SA systems with indicators of expenditure, generosity, problem pressure and social rights yielded a classiﬁcation that partly corresponds to earlier typologies. We found Scandinavian type welfare states with very generous provision and relatively high spending in both areas (Denmark and The Netherlands), and we also identiﬁed a core group of two southern European countries with scarce beneﬁts and extremely low spending (Italy and Greece).

Well, if its not the lazyness, what is it (apart from the tax…) 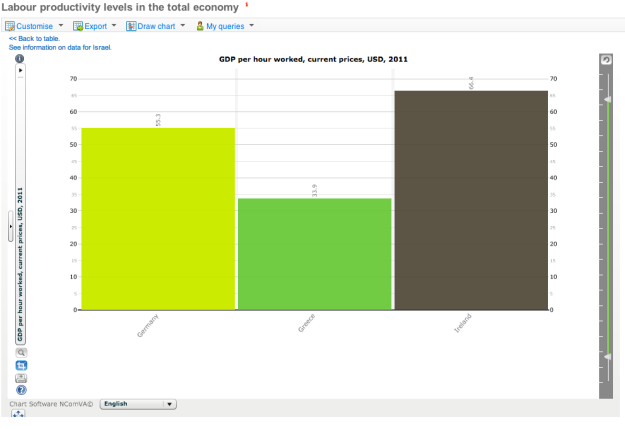 Now, there are reasons to why that is the case but thats for another blogpost. Lets just note that productivity is a function of capital and labour. Clearly the problem in greece is not so much that they work too little, its that they are not somehow transmuting that via interactions with capital (which can be physical, social, human etc) into output.

Back to debt. Greek debt is unrepayable. Everybody knows that and the present posturing is only delaying the inevitable. Countries default, and get debt written off. Germany, amongst the Eurozone members, has been proportionally the largest beneficiary of debt write-off, with debts close to 400% of GDP being written off one way and another, allowing it to reenter the economic and political life of europe after WW2 with an effective clean slate.  Eaten bread is soon forgotten it seems.