So, Austria has in large numbers, voted right. Far right. Ally this to the Jobbik thugs in Hungary, the toxic religio-nationalist rhetoric of the Slovaks, the bubbling threat of the Golden Dawn, the slipping towards legal autocracy of Poland, the rise of Alternative for Deutschland, the rise of xenophobic politics in the UK (for that, at heart, is what drives Brexit), the rise everywhere of anti-migrant feeling, and one wonders – is fascism in all its varieties an endemic virus in most european countries? For all its many problems Irish politics has been remarkably resilient to the siren calls of the far right, for which we should be thankful.

A point that needs to be made is that the modern fascist doesn’t, mostly, wear snazzy Hugo Boss designed uniforms, but suits; doesn’t have an army of thugs, but of astroturfers; cloaks the vileness in honeyed words to avoid the anti-fascism legislation of the post WWII period and so can slip under the radar and into out parliaments quite easily. If you wonder whether someone is a fascist, you could do worse than apply the checklist of the magestic Umberto Eco :  Ur-Fascism by Umberto Eco | The New York Review of Books

Meanwhile, here is my attempt at mapping where we are. 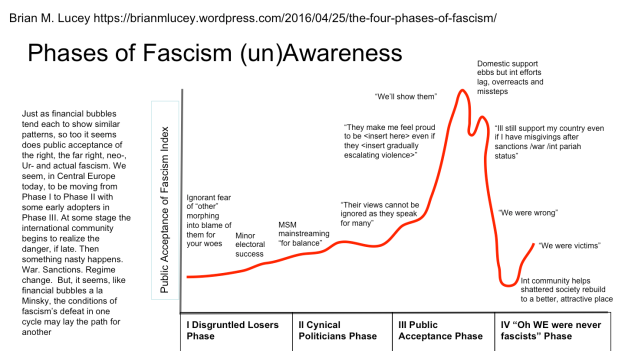