So Richie Boucher, the CEO of Bank of Ireland, is on a salary and benefits package of over 800k.  The BoI AGM is on today, and the Irish taxpayer owns 15% of BoI.   The minister for finance has declined to vote to reduce this package (and that of the part time chairman…). At the same time the other minister for finance Brendan Howlin, has more or less decided to ignore the vote of public sector and will (despite having said he will get the labour relations commission to investigate how to ) impose or assume the pay cuts voted down.

This softly softly approach to Bank of Ireland contrasts massively with the hectoring bullying approach being taken to the public sector. While BoI has done ok over the last year and  Boucher’s tenure it is up the reality is it is still in the intensive care ward. If it finds itself needing billions more it wont go to the markets but to us. So, what applies to me should apply to Richie. But, it wont. So, why is it ok to treat Richie different? Are the richies that different 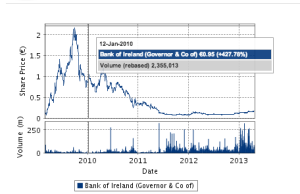 8 thoughts on “The richies are different….”